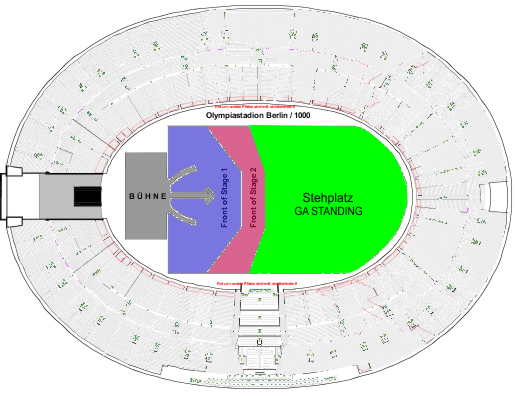 With the bus lines 149, X34 und X49 you can reach the stop Flatowallee/Heerstraße. It's only a short walk from there to the stadium.

With the bus line 104 you can reach the underground station Neu-Westend. From there you can either walk directly to the stadium or take the underground train and exit at the station Olympiastadion.

Information
The Olympiastadion (Olympic Stadium) is a sports stadium in Berlin. There have been two stadia on the site: the present facility, and one that was built for the aborted 1916 Summer Olympics. Both were designed by members of the same family, the first by Otto March and the second by his son Werner March.

Aside from its use as an Olympic stadium, the Olympiastadion has a strong footballing tradition. Historically, it is the ground of club Hertha BSC Berlin. It was also used for 3 matches in the 1974 FIFA World Cup. It hosted six matches, including the final, in the 2006 FIFA World Cup and was renovated for that reason. The German Cup final match is held each year at the Olympiastadion in Berlin.