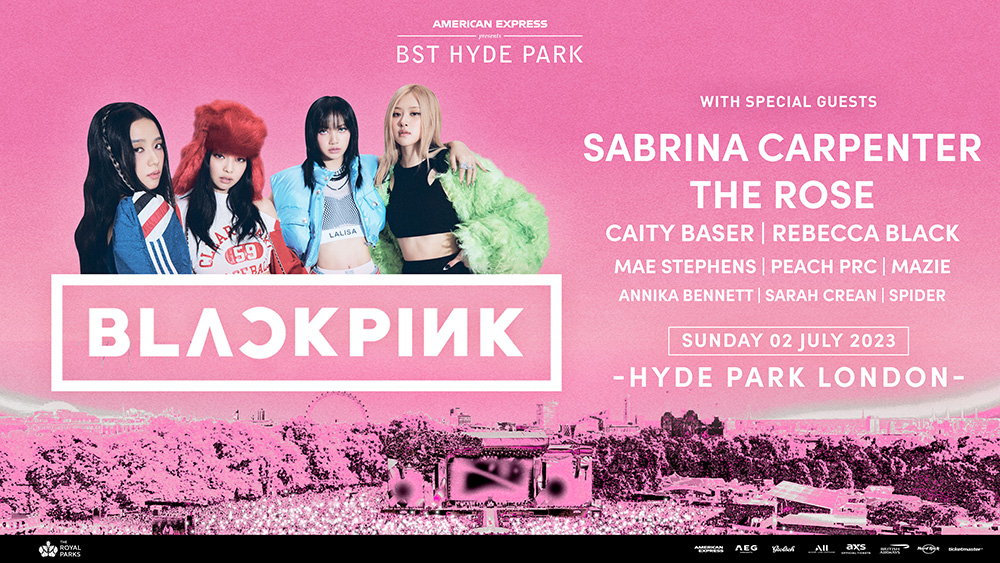 London’s festival American Express presents BST Hyde Park announces that the global superstars and unstoppable K-pop trailblazers, BLACKPINK will join the capital’s biggest festival bill on Sunday 2nd July. Once again making history, BLACKPINK will become the first K-pop act to headline a major UK festival. The South Korean quartet join previously announced Bruce Springsteen and the E Street Band, Billy Joel and P!nk on the BST Hyde Park billing for their London festival debut. Over the course of their 6 year career, BLACKPINK have released 2 studio albums, 3 EPs and have collaborated with fellow global superstars, from Lady Gaga to Cardi B, Dua Lipa and Selena Gomez. - Comprised of members JISOO, JENNIE, ROSÉ and LISA, the group have earned acclaim by becoming the #1 most subscribed act on YouTube (with over 80M) and earning their status as the most-followed girl group on Spotify. They’ve continued to smash their own boundary-defying records with the release of BORN PINK, debuting at #1 on the Billboard 200 in the US, the highest-charting album by a girl group in over a decade. BORN PINK also reached #1 on the UK Official Album Charts, the first ever K-pop girl group to achieve this.

With their countless record breaking hits, BLACKPINK have taken the world by storm. Single ‘SHUT DOWN’ from latest album BORN PINK launched at #1 on the Billboard Global Charts, and previously released single ‘Pink Venom’ made history as the biggest release this decade by a female group or solo artist. At over 269M views, the record-breaking ‘Pink Venom’ was YouTube’s biggest debut of 2022, amassing 90.4M views within the first 24 hours.

We are delighted once again to be able to offer travelling fans Official Premium Ticket & Hotel Packages including choice of VIP Diamond View, VIP All Access Terrace, Gold Circle Standing and Primary Entry GA Tickets! and more ....  Check out also * The Ultimate Diamond with VIP Diamond View Tickets and The Ultimate Terrace with All VIP Terrace Tickets - See you there!

GUIDE TO CONCERT LAYOUT MAP
Provisional Times - Gates Open: 2PM – please note the gates will be open approx. 60 minutes early for those customers who select Primary Entry, Gold Circle, The ALL VIP Terrace – Accor Live Limitless or Diamond VIP Experience tickets and *The Ultimate Diamond* Opens @ 1PM or arrive at your leisure - Age restrictions - Anyone under 16 must be accompanied by a parent or guardian (18 or over) - Disabled Access - All tickets are available via the festival website or AXS.com. There is a Wheelchair platform and an Ambulant area. All tickets come with 1 free personal assistant. We regret that special access tickets are only bookable via the BST website - click here! - American Express presents BST Hyde Park takes place on the Parade Ground on the East Side of Hyde Park. The area is predominantly grass, with limited hard standing pathways. In the event of bad weather, mud and puddles are likely.