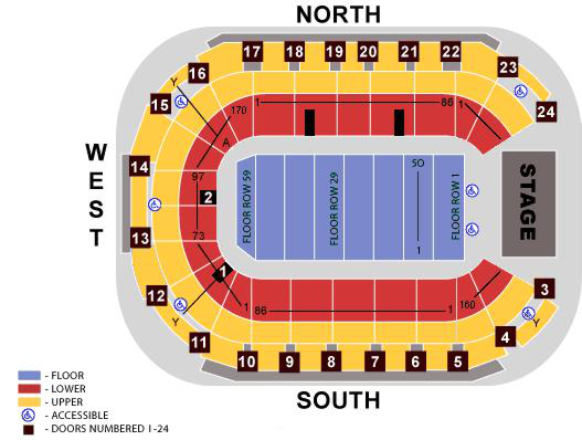 The SSE Arena is located in central Belfast on the banks of the River Lagan, within walking distance of the City Centre. The Arena can be easily accessed by air, sea, road and rail.

From City Hall (Front of City Hall) . . . proceed along Chichester Street until it intersects with Victoria Street. Turn left onto Victoria Street and proceed until Ann Street. Turn right onto Ann Street. Cross at the end of Ann Street to Queen's Bridge. Turn left and walk along the city side of the river until you come to the Queen Elizabeth Bridge. Cross the river over this bridge. Once over the bridge turn left onto Queen's Quay and walk for ¼ mile the entrance to the Arena is on the left.
From Central Station . . .on exiting from the front entrance, turn left and proceed along East Bridge Street. Turn right onto Oxford Street past the Waterfront Hall until you come to Queen Elizabeth Bridge. Cross this bridge and having crossed it, turn left onto Queen's Quay and proceed along this road until you reach the Arena entrance on the left.

Food and drink cannot be brought into the venue.
Smoking is not permitted in the Arena.
Customers leaving the building will not be permitted to re-enter.
Audio and visual recording of a performance is not permitted.
Mobile phones must be switched off during an event.
Sporting colours or tops are not permitted, except for Ice Hockey jerseys.
Prohibited items include: bottles, cans, sticks, air horns, weapons or fireworks, alcohol or other beverages and food not sold at Odyssey Arena, illegal drugs or noxious substances, professional cameras, sound and/or video recording devices and helium balloons.
Latecomers may be refused admission until a suitable break in the performance.
Children under 14 should be accompanied by an adult.
At standing concerts, the standing area is restricted to over 16's.
For safety reasons, before entering, all patrons may be subject to a search in a manner permissable under law. Anyone refusing to consent to personal search will be denied entry.