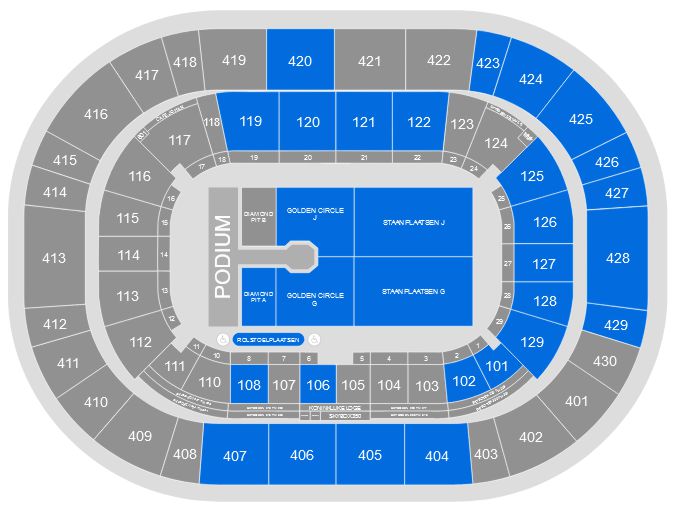 Directions
The Johan Cruyff Arena, (Previously Amsterdam Arena) , can be reached via the A1, A2, A9 and A10 motorways. From the A2 (Utrecht – Amsterdam) take exit S211 (Ouderkerk a/d Amstel/Duivendrecht/Diemen). Follow the signs Amsterdam Zuidoost/Transferium at the end.

There are a total of seven parking areas offering parking space for 9,000 cars and 170 buses at walking distance. Drivers are given the ideal route to the stadium by means of a computer-controlled routing system. Parking cards cost 7 Euros (P-2 to P-10) and 14 Euros (P-1) and can be purchased in advance from the TicketBox sales outlets (national lottery sales outlets). There are bicycle sheds around the The Johan Cruyff Arena with room for 3,000 bicycles.

Information
Initially, it was planned as the centrepiece of Amsterdam's bid for the 1992 Olympic Games. Amsterdam lost the bid to Barcelona and the plans for the stadium were altered to build a general sports and events arena instead. Today, the stadium is home to football club AFC Ajax, and NFL Europa franchise the Amsterdam Admirals. The stadium, which opened in 1996, is one of the first in the world to combine a retractable roof with a grass surface. This caused some problems in the beginning: the grass rolls would not grow in the shade of the open roof and had to be replaced up to four times a year. Its all-seated capacity is 51,628.