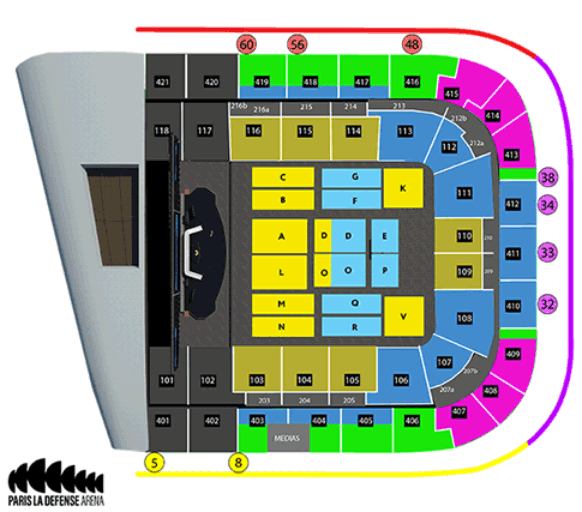 The new identity of Paris La Défense Arena (formerly the U Arena) was unveiled on Tuesday, June 12 2018 during the match France 98 vs Fifa 98. This graphic identity is inspired by the iconic architecture of the building and its scales designed by Christian de Portzamparc. It establishes a clear link between the new territorial identity of Paris La Défense and this iconic equipment, a true symbol of the transformation of the business district.

This identity, created by the agency Babel, reflects the energy and the intensity of the emotions that are lived in the enclosure.

Imagine a place that is not just a room or a stadium, but a place for a new experience. A place created beyond norms and standards to revolutionize emotions and feelings. An enclosure twice as big as the usual standards of European arenas. The only one in the world whose stands are organised in U to sublimate the multiple emotions of the live show, on the field or the stage, by the most advanced innovation.

The venue is served by Line A on the RER system, and will soon also be served by line E.

It is also served by Line 1 of the Paris Métro, and will soon be on line 15 too!

It is also on Tramway line T2, and is served by train lines L & U.

Although the venue advise you to arrive at Paris La Defense Arena by public transport, two partner car parks are at your disposal. Directly on Boulevard Circular Defense, make your choice according depending on your direction of travel:
• If you are coming from the A86 or the A14, take the VILLON car park, Rue Delarivière Lefoullon, 92800 Puteaux
• If you come from Paris or the ring road, take the COUPOLE REGNAULT car park, 15 Square Henri Regnault, 92400 Courbevoie

By reserving your parking in advance you benefit from a 6 hour parking package at a reduced price. This can be done on the venue website.

In order to avoid the long queues at the entrance, the veune advise you to schedule your arrival as soon as possible. Excavations will be reinforced on event days. In fact, waiting at the doors may be prolonged. It is advisable not to bring backpacks, sports bags, motorcycle helmets or other bulky items. If necessary, they will be placed in locker near the control places. It is also advised that suitcases are not allowed in the enclosure. Pre-filtering points around the room will be put in place and the searches at the doors will be strengthened and will be maintained even after the start of events.

Instructions to follow
• Searches will take place at the venue
• Avoid bringing prohibited items, they will not be allowed in
• Do not bring large bags
• No re-entry

Anyone entering the room must comply with the Internal Regulations, as well as the laws and regulations in force.

A contemporary brasserie that changes over the course of the day, to the rhythm of the dynamic Seine Arche district, and Paris La Défense Arena, new rendezvous for sports and great shows. Go for a quick lunch, privatize the lounge for a business lunch, or have a coffee in the afternoon. In the evening, after work or before a concert, the big room comes alive in a convivial atmosphere around sharing boards and cocktails.

Both simple and modern, the restaurant reinvents with lightness the essential classics of the brewery. The best of the season in this new location thought as a place of life.

Open Monday to Friday from 11:30 to 21:00, evenings and weekends according to programming

In Paris La Defense Arena, they wanted to break the habits of sports venues and French theaters. Why in a country where gastronomy holds a special place, can spectators not be offered more quality? Here they cook everything on the spot with fresh products chosen among the best on the market. Here they toast their bread, roll their sandwich, cook their steaks, assemble their hot dogs, taste their pizzas, but most of all, love their customers!