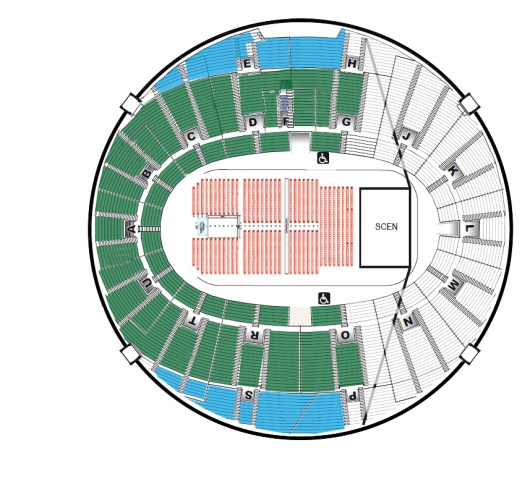 DIRECTIONS
Scandinavium is located in central Gothenburg, in the Heden district of the borough Centrum. The arena is a 10 minute walk from the very city centre.

PARKING
The arena has a parking lot right next to the stadium for around 300 cars. The cost of parking is around 15 SEK per hour.

PUBLIC TRANSPORT
Public transport is easily accessible; Just outside there is a tram stop named after the arena, which serves tram lines six, eight, thirteen, and fourteen. Tram lines four and five stops 250 meters from the arena at Korsvagen, a major public transport hub, which serves more than fifteen different bus lines, and will have an underground rapid transit station once Vastlanken is completed. Approximately one and one half kilometer north west from Scandinavium is the Gothenburg Central Station and the Nils Ericson Terminal, one half kilometer south east is the Liseberg station serving the Gothenburg commuter rail.